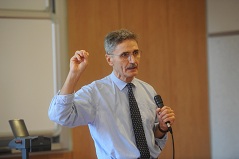 In 2004 he succeeded Giovanni Sartori as Editor of "Rivista Italiana di Scienza Politica" that he directed until 2009. In 2006 he was the first Italian scholar awarded the Amalfi European Prize for the Social Sciences, and in 2009 he won the Filippo Burzio Prize for the Political Sciences. In 2011, he was the winner of the Capalbio Prize for Europe. He was Jemolo Fellow at the Nuffield College, Oxford University and Jean Monnet Chair Professor at the Robert Schuman Center for Advanced Studies, European University Institute, Florence. He was Fulbright Professor at Department of Government and Kennedy School of Government at Harvard University. He lectured and taught in many countries of Europe, North and South America and Asia and he is a referee for several international academic journals. He directed several international and Italian research groups.

By the end of 2012, he published fourteen books, two co-authored books and fourteen edited or co-edited books, and hundreds of articles and essays in seven languages in Comparative and European Government and Politics, American Government and Politics, International and Transatlantic Relations and Foreign Policy, Italian Politics and Political Theory. He is editorialist of the daily financial newspaper "Il Sole 24Ore".

A cv with a chronological list of publications is available here